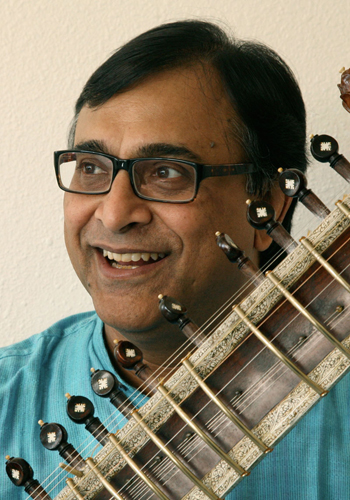 I began studying with my guru, Partha Chatterjee, in 2002, through the recommendation of a friend and mentor, Paul Livingstone. Parthada, as we call him, has brought the classical music of India to my heart and enabled me to play it even when I thought it was beyond my grasp. In the early years I failed to practice well because I was overwhelmed by the challenge and unable to concentrate on what was necessary. While studying with him at his home in Kolkata, Parthada gently warned me that if I could not practice, he could not enjoy teaching me. During that month I practiced eight hours a day and was able to improve enough for him to give me another chance! I love Parthada because I can see how this music touches his heart to the point of tears over and over again. I believe that he understands music and how it can soften us, humble us, and bring us nearer to God.

This is a 20 stringed instrument, with two additional bass strings known as Kharaj and Pancham. The maestro, and founder of our gharana, Allauddin Khan, advised his student Ravi Shankar to add these strings to his sitar, and since that time many others in the Maihar gharana, such as Nikhil Banerjee (my guru’s guru), have included these two bass strings on the instrument. My instrument was made in 2001 by Hiren Roy’s son Barun Roy (who has carried on making sitars of equal quality since his father passed away).

To order a Barun Roy sitar from Kolkata you will want to call him on the telephone one year in advance! These are the best sitars in the world, entirely made by a small crew run by Barun out of his home. You can also buy his sitars through Rain City Music.

When I lived in Lucknow from 1991-1999, I studied at Bhatkhande Music College with a number of gurus, including Abhinav Sinha, who played the Vilayat Khan style, using a sitar of 18 strings. So I bought this Rikhi Ram sitar from the maker in Delhi. Luthier, Paul Saunders drilled a hole in the side just by the neck and put a pickup right under the bridge. It has a very powerful and bright sound and stays remarkably in tune. The workmanship is excellent and the designs are simple and unadorned.